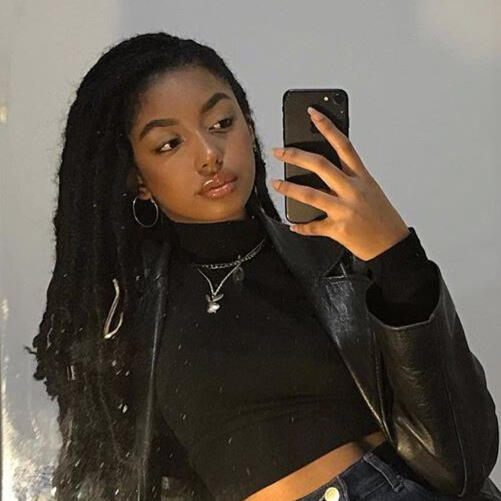 Appearance: Jayden has brown skin, a rounded chin, and a thin face. Her lips are thick; her eyes, round and very dark; her nose, a little bulging and upturned. She has long, thick hair, dark black, and she usually wears it in braids or dreadlocks. She is of slim build, but not skin and bones. Jade has a small waist and is well endowed
Personality: Jayden is a woman who goes very forward, she does not usually speak much but when she does it is usually abrupt and commonly rude. She often has bad manners, she does not stand that people insult her sister, she is unruly, life does not seem to matter to her, she has a very strong character and a lot of accumulated hatred. She is vulnerable, but she would never show it to anyone, and although she appears invincible deep down, she is very scared and feels a lot of responsibility. She's really intelligent, ambitious and astute
Boggart: Alexis dying in front of her, unable to do anything to help her. Death
Patronus: Can't produce it yet (Bear)

Backstory: Jayden lived with her parents and her five-years-younger sister in a mansion at the base of a hill in Ireland. Since Roxanne and Albert were both part of the Sacred 28, their daughters had a fairly quiet and comfortable life. But shortly after Jay turned nine, her parents were murdered by an elderly neighbor close to town. The cause was never discovered, nor the murderer in question was caught. Jay and Xis went to live in an orphanage, with a great fortune in Gringotts destined to their studies, and that will be Jayden's as soon as she turns 17. When Jay was 11 years old her letter for Hogwarts arrived, so both she and her sister were taken to a temporary wizarding home in England. Jayden spends the entire year at Hogwarts and returns for the summer vacation to the house, while Alexis never leaves it (until she receives her letter). Since her parents died, Jay has been much more aware of her sister and treats her much more protectively. She never lets anyone take her away from her for a few moments, and every time she had to go to Hogwarts she made Alexis write her a letter a day about how she was doing. Jade feels a great responsibility towards her sister and tries to protect her at all costs.